Any serious illness, such as cancer or stroke, or recovering from medical treatments can make you tired. But other illnesses can also leave you feeling washed out.

What’s the difference between tiredness and fatigue?

Here are 10 health conditions known to cause tiredness or fatigue.

One of the most common medical reasons for feeling constantly run down is iron deficiency anaemia.

Women with heavy periods and pregnant women are especially prone to anaemia.

But it can also affect men and postmenopausal women, when the cause is more likely to be problems with the stomach and intestines, such as an ulcer or taking non-steroidal anti-inflammatory drugs (NSAIDs).

Typically, you feel you can’t be bothered to do anything, your muscles feel heavy, and you get tired very quickly.

It’s possible to have too much iron, which can also cause tiredness, when it’s known as iron-overload disorder (haemochromatosis).

This is a relatively rare inherited condition that affects men and women between the ages of 30 and 60.

Sleep apnoea is a condition where your throat narrows or closes during sleep and repeatedly interrupts your breathing.

This results in loud snoring and a drop in your blood’s oxygen levels. The difficulty in breathing means you wake up often in the night and feel exhausted the next day.

An underactive thyroid gland means you have too little thyroid hormone (thyroxine) in your body. This makes you feel tired.

You’re also likely to put on weight and have aching muscles and dry skin. It’s most common in women and happens more often as you get older.

Your GP can diagnose an underactive thyroid by taking a blood test.

This is a lifelong disease caused by the immune system reacting to gluten. Gluten is a protein found in bread, cakes and cereals.

One in 100 people in the UK are affected, but research suggests many of them don’t know they have the condition, according to patient group Coeliac UK.

Other symptoms of coeliac disease, apart from tiredness, are diarrhoea, bloating, anaemia and weight loss. Your GP can do a blood test to check if you may have coeliac disease. 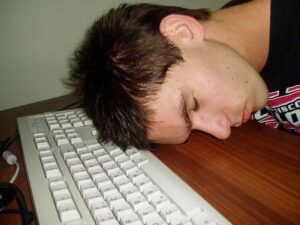 Chronic fatigue syndrome (also known as myalgic encephalomyelitis, or ME) is a severe and disabling fatigue that goes on for at least 4 months. There may be other symptoms, such as muscle or joint pain.

One of the main symptoms of type 1 and type 2 diabetes is feeling very tired.

Other key symptoms are feeling very thirsty, peeing a lot (particularly at night) and weight loss. Speak to a GP if you think you might have diabetes symptoms.

Glandular fever is a common viral infection that causes fatigue, along with fever, sore throat and swollen glands.

Most cases happen in teenagers and young adults. Symptoms usually clear up within 4 to 6 weeks, but the fatigue can linger for several more months.

As well as making you feel very sad, depression can also make you feel drained of energy.

It can stop you falling asleep or cause you to wake up early in the morning, which makes you feel more tired during the day.

This is when you get an overwhelming urge to move your legs, which can keep you awake at night.

You might also have an unpleasant crawling sensation or a deep ache in your legs. Or your legs might jerk spontaneously through the night.

Whatever your symptoms, your sleep will be disrupted and poor quality, so you’ll feel very tired throughout the day.

Feeling anxious is sometimes perfectly normal. But some people have constant uncontrollable feelings of anxiety that are so strong they affect their daily life.