Uterine Fibroids (Myomas) are common non-cancerous (benign) tumors of the uterus and are the most frequent reason for recommending a hysterectomy. They grow from the muscular wall of the uterus and are made up of muscle and fibrous tissue. Many women over 35 have fibroids but usually have no symptoms.

In some women, however, fibroids (myomas) may cause heavy bleeding, pelvic discomfort, and pain and occasionally exert pressure on other organs. These symptoms may require treatment. Treatment may take the form of medication to control pain and bleeding, hormone therapy to shrink the tumor, surgery to remove the tumor, or occasionally a hysterectomy.

There are promising new experimental drugs that may temporarily shrink tumors. These drugs may have serious side effects and are generally very costly. There is a type of abdominal surgery (myomectomy) that removes the myoma without removing the uterus.

These treatments may be sufficient or they may offer temporary relief and enable a woman to postpone having a hysterectomy, especially if she still wishes to bear children. In most severe cases a hysterectomy may be recommended.

Some women choose to do nothing since fibroids will often shrink in size as a woman goes through menopause.

What is a Fibroid (Myoma)?

A fibroid is a non-cancerous growth (tumor) made up of mostly fibrous tissue, like a muscle. Fibroids grow in or around the uterus (womb). They are the most common type of growth in a woman’s pelvic area (the pelvis is the bony structure at the bottom of the spine).

According to the U.S. National Institutes of Health (NIH), 20-25% of women of reproductive age have fibroids. By the age of 50, up to 80% of black women and up to 70% of white women have fibroids. 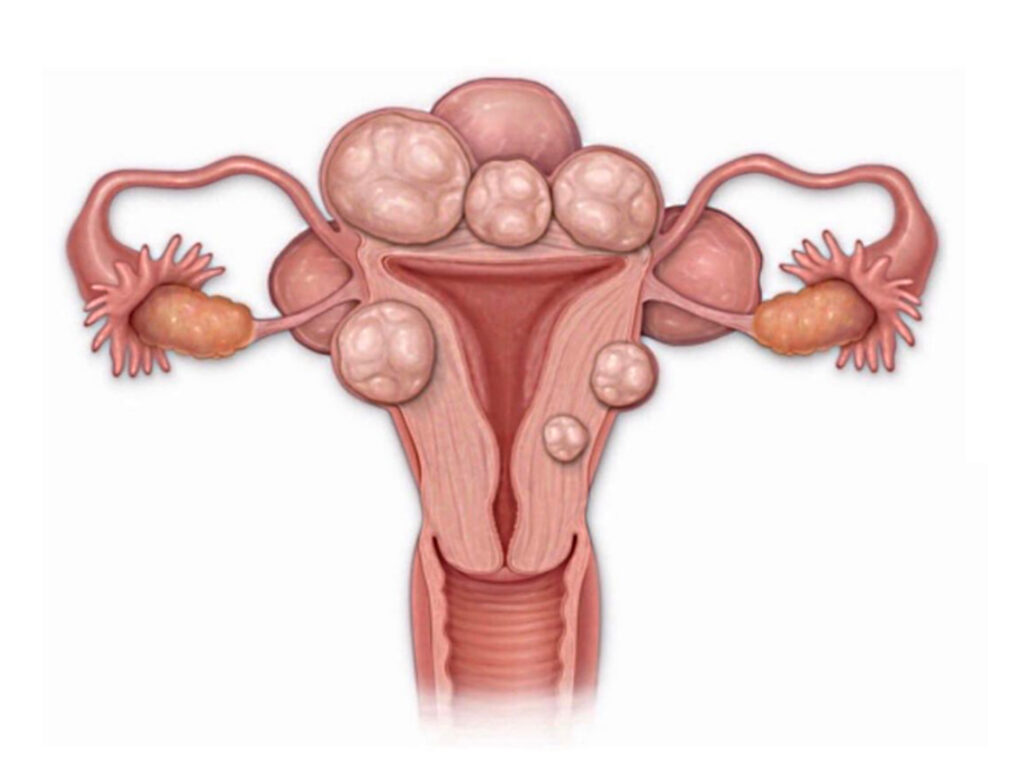 Uterine fibroids are most common in women who are in their 40s and early 50s, although some women may develop fibroids at a younger age. At least 25% of women have uterine fibroids which can cause problems. Many women with fibroids never have a problem and never know they have a fibroid.

Are there different types of fibroids (myomas)?

Fibroids begin when cells overgrow in the wall of the uterus. However, the cause of uterine fibroids is not known. Researchers have many ideas of what may cause fibroids, but none of these are seen as definite causes of fibroid tumors. Some of these ideas include:

Fibroids grow rapidly during pregnancy when hormone levels are high and shrink when anti-hormone medicine is used. Fibroids also stop growing or shrinking once a woman reaches menopause.

Can fibroids turn into cancer?

Fibroids are usually benign (not cancerous). Having fibroids does not increase a woman’s risk of developing cancer. In less than 1 in 1,000 cases a cancerous fibroid will occur. A cancerous fibroid is called leiomyosarcoma.

Age, race, lifestyle, and genetics may play a part in the development of fibroids. Here are the few known risk factors:

What are the symptoms of fibroids?

For most women, fibroids do not cause symptoms. At least 25% of women who have uterine fibroids do have symptoms which may include:

Fibroids can also cause infertility (being unable to get pregnant), miscarriages, or premature labor (labor before 37 weeks of pregnancy).

How do you know you have a fibroid?

The pelvic exam and the tests help your health care provider find out if you have fibroids, where they are, and how large they are.

Your health care provider can do an imaging examination to produce a picture to confirm that you have fibroids. These might include:

Will I have trouble getting pregnant if I have myomas?

What kinds of problems will fibroids cause in pregnancy?

The most common complications caused by fibroids during pregnancy are: