Nasal congestion (also referred to as stiff or blocked nose) is one of the frequently reported upper respiratory conditions that affect individuals of all age groups. The pathophysiology revolves around the swelling or nasal congestion of nasal lining due to an allergic or inflammatory process, thereby culminating in constricted nasal passageways and difficulty in breathing.

The swelling may involve soft tissues of nose or blood vessels that supply nasal passageways. A blocked nose (nasal congestion) may also suggest other respiratory conditions such as sinusitis or the common cold. If you are experiencing blocked nose all the time, it is quite likely that you are suffering from chronic sinusitis. In the absence of appropriate management, the risk of complications such as speech impairment, hearing problems and sleep apneaincreases several folds.

What Could Cause Blocked Nose All the Time?

Rhinitis is characterized by the inflammation of nasal mucus membrane due to allergy or other irritants such as exposure to chemicals, fog, environmental pollutants, use of certain drugs or foreign body impaction. As an inflammatory response, the nasal lining undergoes edematous, thereby obstructing and blocking the respiratory passages. According to a latest survey, approximately 50 million Americans (20% of the entire population) suffer from rhinitis.

Allergy can be described as an innate immune response which is activated when a foreign particle or protein (such as an allergen) enter into the body. An allergen can trigger the immune response and can be anything such as dust particle, smoke, mites, pollen etc.  In response to invading allergens, an inflammatory mediator (histamine) is released from the mast cells, which causes congestion of the nasal tract. Histamine secretion also increases the release of mucus from the mucus membranes.

Nasal infections caused by viruses are a common cause of nasal congestion and blockage. These viruses enter through the nasal cavity to elicit an inflammatory response and reactionary nasal swelling. If your nasal fluid or mucus appears yellow or green, you should seek medical attention as it suggests that the infection has invaded the lungs or upper respiratory tract.

Structural abnormalities include anatomical or congenital anomalies of the nose or nasal septum. In addition, certain accidents or injuries can also lead to anatomical defects of the nasal septum. The most common structural anomaly is called “deviated nasal septum” in which the cartilage between two nostrils is deviated to one end of the nose. Other conditions include polyps in the nose, twisted or bent nose, valve collapse etc.

Enlarged adenoid glandscan also cause congestion of nasal pathways and aggravate the risk of infections.

Nasal congestion in infants has more severe effects because it could interfere with feeding and causing breathing problems. Chronic and poorly managed cases of blocked nose all the time in infants can culminate in developmental delays, as well as speech and hearing abnormalities.

If your baby is suffering from nasal blockage, it is strongly recommended to consult a pediatrician on emergent basis so that a complete physical examination can be performed.

When Should I See a Doctor?

A person should consult his/her physician if any of the following conditions appear:

Do I Need Any Tests If I Have Blocked Nose All the Time? 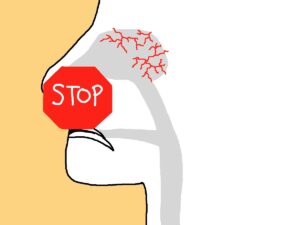 Generally, there is no specific test to be done. It is safe to say that the diagnosis for blocked nose is usually clinical and a physician can identify the condition by taking a person’s medical history and symptoms. If necessary, a thorough nasal examination can be performed to confirm the source of infection/ inflammation.

How Can I Deal with Blocked Nose All the Time?

Medical treatment is suggested when your symptoms are not responding to home remedies, and your condition is interfering with daily life activities. Possible treatment methods include: