The stomach functions both as a reservoir and as a digestive organ. It empties its contents in small portions (suitable for continued digestion) into the small intestine.

Anatomically, the stomach is divided into:

Histologically, most of the layers of the wall of the stomach appear similar in its different parts. Regional differences are mainly restricted to the appearance of the gastric mucosa.

The mucosa is thrown into longitudinal folds (gastric folds or rugae), which disappear when the stomach is fully distended. A network of shallow grooves divides the mucosa into gastric areas (1-5 mm). On the mucosal surface we see small, funnel-shaped depressions (gastric pits). Almost the entire mucosa is occupied by simple, tubular gastric glands which open into the bottom of the gastric pits.

In contrast to the surface epithelium, cellular composition and function of the gastric glands are specialized in the different parts of the stomach. 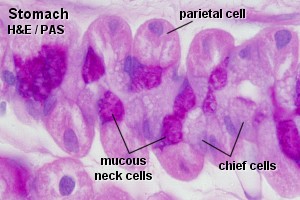 Cardiac glands are heavily branched tubular glands (similar to the cardiac glands of the esophagus), which contain mainly mucus-producing cells. A few of the secretory cells characteristic for the principal glands (see below) may be present.

Each glandular tubule (oriented more or less perpendicular to the surface of the epithelium) consists of three parts: a deep body, an intermediary neck and an upper isthmus. In principal glands we find four cell types: chief cells, parietal cells, mucous neck cells and endocrine cells.

are the most numerous of the four types. They occur primarily in the body of the glands. They produce pepsinogen, which is a precursor of the proteolytic enzyme pepsin.
The pH optimum of of pepsin is about 2. This enzyme is able to break down collagen.

Note that so far only one type of bacteria has found which can live happily in the stomach -Helicobacter pylori. Unfortunately these bacteria are involved in the pathogenesis of gastritis and gastric ulcers.Parietal cell also secrete intrinsic factor, which is necessary for the resorption of vitamin B12.

Vitamin B12 is a cofactor of enzymes which synthesise tetrahydrofolic acid, which, in turn, is needed for the synthesis of DNA components. An impairment of DNA synthesis will affect rapidly dividing cell populations, among them the haematopoietic cells of the bone marrow, which may result in pernicious anemia. This condition may result from a destruction of the gastric mucosa by e.g. autoimmune gastritis or the resection of large parts of the lower ileum, which is the main site of vitamin B12 absorption, or of the stomach.

are found between the parietal cells in the neck of the gland. They are difficult to distinguish from chief cells in plain H&E stained section.

Endocrine cells are scattered, usually solitary, throughout the epithelium of the gastrointestinal tract. They are part of the gastro-entero-pancreatic (GEP) endocrine system. The best characterized endocrine cells in the gastric mucosa are gastrin-producing cells (G cells) and somatostatin-producing cells (D cells). G cells are most frequent in the middle third of the glands. They stimulate the secretion of acid and pepsinogen. G cell function is stimulated by nervous input, the distension of the stomach or secretagogues. D cells are found mainly in glands of the pyloric antrum. They inhibit G cells and thereby acid production. D cell function is stimulated by acid in the lumen of the stomach and duodenum.

Pyloric glands are more coiled than principal glands, and they may be branched. Endocrine cells, in particular gastrin-producing cells, are more frequent than in principal glands. A few parietal cells may be present but chief cells are usually absent.

The lamina propria is formed by a very cell-rich loose connective tissue (fibroblasts, lymphocytes, plasma cells, macrophages, eosinophilic leukocytes and mast cells). The muscularis mucosae of the stomach contains both circular and longitudinal layers of muscle cells. Its organization is somewhat variable depending on the location in the stomach.

Large blood vessels, lymph vessels and nerves are located in the submucosa which consists of loose connective tissue.

Note that the muscularis externa consists of three layers of muscles: an inner oblique layer, a middle circular layer and an outer longitudinal layer.

The small intestine is divided into duodenum (25-30 cm), jejunum (about first two-fifths of the rest) and ileum. The three segments merge imperceptibly and have the same basic histological organization. 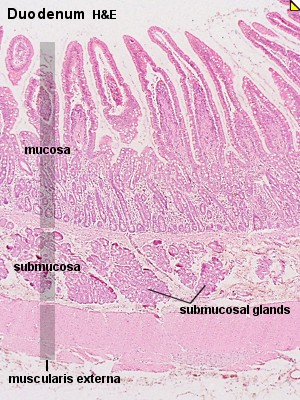 Plicae circulares (of Kerkering) are macroscopically visible, crescent-shaped folds of the mucosa and submucosa. Plicae circulares extend around one-half to two-thirds of the circumference of the lumen of the small intestine.

Between the intestinal villi we see the openings of simple tubular glands, the crypts of Lieberkühn. They extend through the lamina propria down to the muscularis mucosae. Undifferentiated cells close to the bottom of the crypts regenerate the epithelium (epithelial cell turnover time is less than one week). Other epithelial cells in the crypts correspond largely to those in the epithelium of the intestinal villi. One exception are Paneth cells which are located at the bottom of the crypts. They release a number of antibacterial substances, among them lysozyme, and are thought to be involved in the control of infections.

One function of the crypts of Lieberkühn is the secretion of “intestinal juice” (about 2 liter/day), which in its composition closely resembles extracellular fluid and which is rapidly reabsorbed. The only enzymes which can be demonstrated in the intestinal juice are enteropeptidase (or enterokinase), which activates the pancreatic enzyme trypsin, and small amounts of amylase. In addition to enterocytes, the epithelium is composed of mucus-secreting goblet cells and endocrine cells. 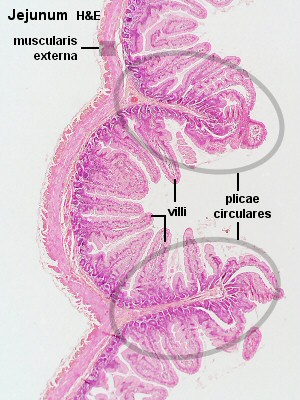 The muscularis mucosae has two layers and extends into the intestinal villi, where the smooth muscle cells form a longitudinal bundle in the centre of the villi.

The submucosa contains glands only in the duodenum. Submucosal glands of the duodenum are also called Brunner’s glands. Their secretion is mucous and slightly alkaline due to bicarbonate ions (pH 7-8). The amount of bicarbonate is however too low to neutralize the acidic contents of the duodenal lumen. Instead, the secretion of Brunner’s glands protects the duodenal mucosa – similar to the mucus which protects the gastric mucosa. 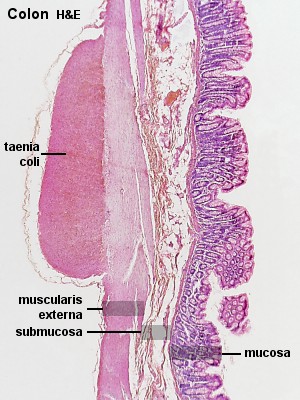 The surface of the mucosa is relatively smooth as there are no plicae circulares or intestinal villi. Crypts of Lieberkühn are present and usually longer and straighter than those of the small intestine. Goblet cells account for more of the epithelial cells than in the small intestine.

There is only little lamina propria squeezed between the glands. The muscularis mucosae again forms two layers.Considerable amounts of fat may be found in the submucosa.

The appearance of the muscularis externa is different from that of the small intestine. The inner circular layer of muscle forms the usual sheath around the large intestine, but the outer longitudinal muscle layer forms three flattened strands, the taenia coli. Only a thin layer of longitudinal muscle surrounds the inner circular muscle layer between the taenia coli .

Specialized Sections of the Large Intestine 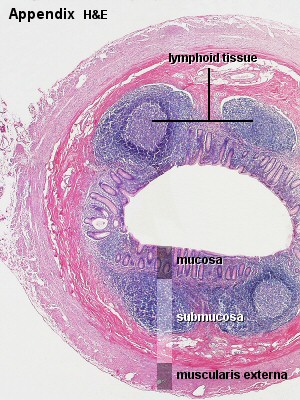 is a small blind-ending diverticulum from the cecum. The most important features of the appendix is the thickening of its wall, which is mainly due to large accumulations of lymphoid tissue in the lamina propria and submucosa. Intestinal villi are usually absent, and crypts do not occur as frequently as in the colon. There is often fatty tissue in the submucosa. The muscularis externa is thinner than in the remainder of the large intestine and, the outer, longitudinal smooth muscle layer of the muscularis externa does not aggregate into taenia coli.

An extreme proliferation of lymphocytes (lymphoid hyperplasia) as a consequence of bacterial or viral stimulation may lead to the obstruction of the lumen of the appendix and thereby cause appendicitis, but this is only one of many possible causes.

Junctions between the major parts of the alimentary canal share a rapid transition from tissues characteristic of one part to those characteristic for the next part, e.g. the transition from the stratified squamous epithelium of the oesophagus to the glandular epithelium of the stomach. Many junctions are in addition accompanied by morphological specializations, e.g. the pylorus at the gastro-duodenal junctions or the ileo-caecal valve at the ileo-caecal junction.

Compared with these rapid changes, “junctions” between parts of the small intestine are very gradual morphological transitions.