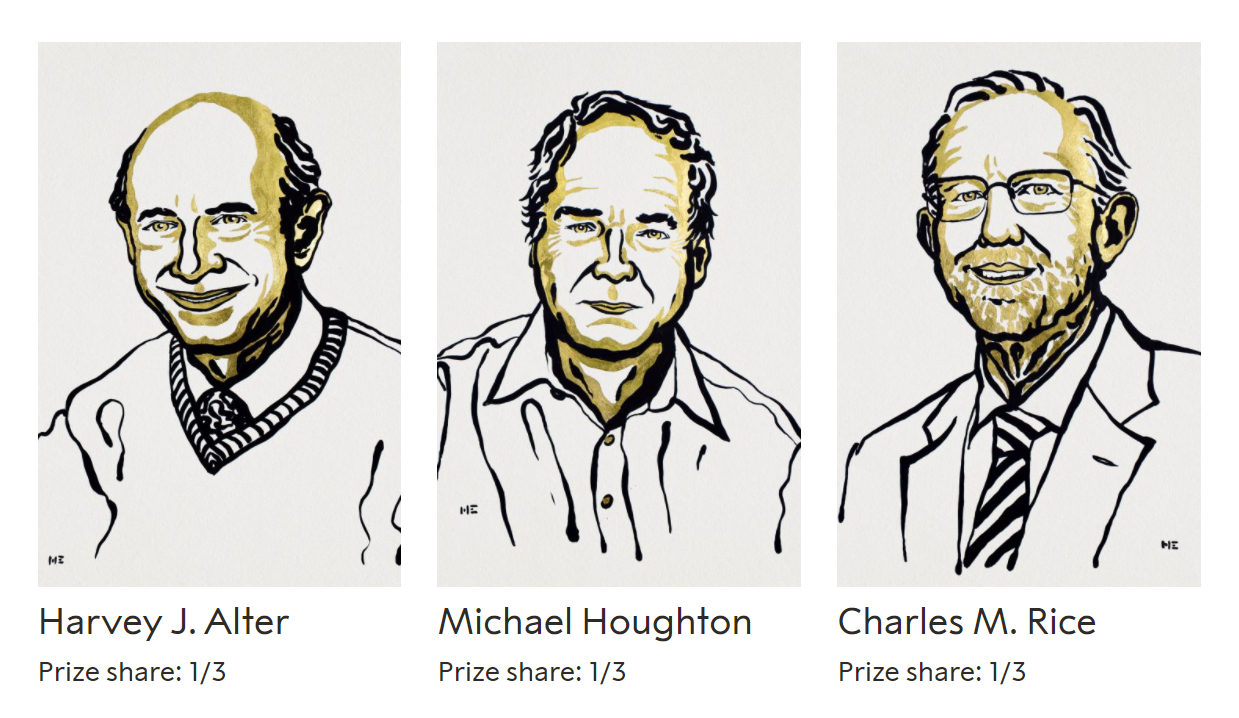 This year’s Nobel Prize is awarded to three scientists who have made a decisive contribution to the fight against blood-borne hepatitis, a major global health problem that causes cirrhosis and liver cancer in people around the world.

Nobel Prize in Physiology or Medicine 2020

Since 1901, the Nobel Prize in physiology or medicine has been awarded to 219 scientists, including 12 women. The youngest laureate was 32 years old; the oldest 87.

Harvey J. Alter, Michael Houghton and Charles M. Rice made seminal discoveries that led to the identification of a novel virus, Hepatitis C virus. Prior to their work, the discovery of the Hepatitis A and B viruses had been critical steps forward, but the majority of blood-borne hepatitis cases remained unexplained.

The discovery of Hepatitis C virus revealed the cause of the remaining cases of chronic hepatitis and made possible blood tests and new medicines that have saved millions of lives.

Hepatitis C causes serious liver disease, which can be fatal. The virus is transmitted through bodily fluids, including blood. The discovery led to a test for the virus, which is now widely used to protect people from becoming infected through blood transfusions. The discovery also led to antiviral drugs to treat the infection.

“For the first time in history, the disease can now be cured, raising hopes of eradicating hepatitis C virus from the world population,” the Nobel Committee said in a statement.

The World Health Organization estimates that 71 million people worldwide have chronic hepatitis C, which can lead to liver cancer and cirrhosis. There are approximately 400,000 deaths annually from the disease, according to WHO.

In the U.S., there are more than 50,000 cases of hepatitis C each year, a rate that continues to rise as the opioid epidemic endures, according to the Centers for Disease Control and Prevention.

While the drugs for hepatitis C are effective, their high cost — at tens of thousands of dollars per course of treatment — has limited their use both in the U.S. and in the developing world.

The price has come down as more drugs are developed, but cost remains a significant barrier to many people with the disease. Untreated, the virus continues to spread through drug use and sexual activity.

Alter’s studies at NIH of transfusion-associated hepatitis “demonstrated that an unknown virus was a common cause of chronic hepatitis,” according to the Nobel Assembly. Houghton used an untested strategy to isolate the genome of the new virus. He did his work at the Chiron Corp. in Emeryville, Calif. Rice, working at Washington University in St. Louis, provided the final evidence showing that the hepatitis C virus alone could cause hepatitis.

“This has been a virus that has been a plague affecting millions of people, and still is unfortunately,” Thomas Perlmann, secretary-general of the Nobel Assembly, said during an interview after the announcement.

“Prior to their work, the discovery of the hepatitis A and B viruses had been critical steps forward, but the majority of blood-borne hepatitis cases remained unexplained,” the assembly says.

“The discovery of the hepatitis C virus revealed the cause of the remaining cases of chronic hepatitis and made possible blood tests and new medicines that have saved millions of lives,” according to the announcement.