Every person has 2 kidneys, which are located above the waist on both sides of the spine. These reddish-brown, bean-shaped organs are each about the size of a small fist. They are located closer to the back of the body than to the front.

Most people have 2 kidneys. Each kidney works independently. This means the body can function with less than 1 complete kidney. With dialysis, a mechanized filtering process, it is possible to live without functioning kidneys.

Dialysis can be done through the blood, called hemodialysis, or by using the patient’s abdominal cavity, called peritoneal dialysis.

Renal cancer begins when healthy cells in 1 or both kidneys change and grow out of control, forming a mass called a renal cortical tumor. 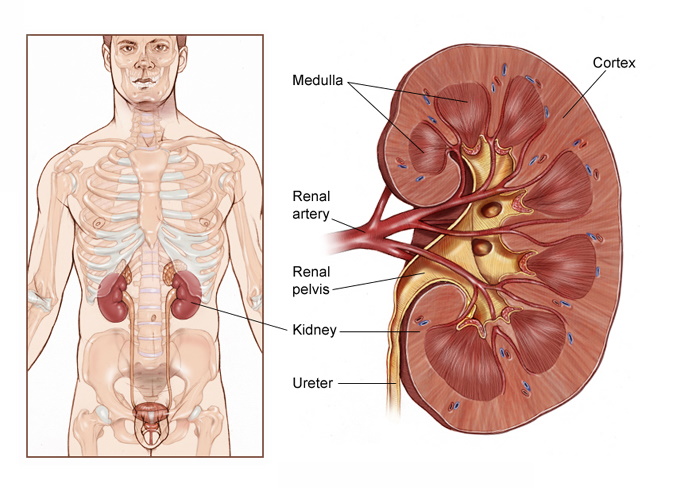 A tumor can be malignant, indolent, or benign.

There are several types of renal cancer:

Renal cell carcinoma is the most common type of adult kidney cancer, making up about 85% of diagnoses. This type of cancer develops in the proximal renal tubules that make up the kidney’s filtration system. There are thousands of these tiny filtration units in each kidney.

This is also called transitional cell carcinoma. It accounts for 5% to 10% of the renal cancers diagnosed in adults. Urothelial carcinoma begins in the area of the kidney where urine collects before moving to the bladder, called the renal pelvis.

This type of renal cancer is treated like bladder cancer because both types of cancer begin in the same cells that line the renal pelvis and bladder.

Sarcoma of the kidney is usually treated with surgery. However, sarcoma commonly comes back in the kidney area or spreads to other parts of the body. More surgery or chemotherapy may be recommended after the first surgery.

Wilms tumor is most common in children and is treated differently from renal cancer in adults. Wilms tumors make up about 1% of renal cancers.

This type of tumor is more likely to be successfully treated with radiation therapy and chemotherapy than the other types of renal cancer when combined with surgery. This has resulted in a different approach to treatment.

Lymphoma can enlarge both kidneys and is associated with enlarged lymph nodes, called lymphadenopathy, in other parts of the body, including the neck, chest, and abdominal cavity.

In rare cases, renal lymphoma can appear as a lone tumor mass in the kidney and may include enlarged regional lymph nodes. If lymphoma is a possibility, your doctor may perform a biopsy and recommend chemotherapy instead of surgery.

The most common types of renal cancer cells are listed below. In general, the grade of a tumor refers to the degree of differentiation of the cells, not how fast they grow.

Differentiation describes how much the cancer cells look like healthy cells. The higher the grade, the more likely the cells are to spread or metastasize over time.

Papillary renal cancer is found in 10% to 15% of patients. It is divided into 2 different subtypes, called type 1 and type 2. Localized papillary kidney cancer is often treated with surgery.

Each of the tumor subtypes of kidney cancer (clear cell, chromophobe, and papillary, among others) can show highly disorganized features under the microscope. These are often described by pathologists as “sarcomatoid.”

This is not a distinct tumor subtype, but when these features are seen, doctors are aware that this is a very aggressive form of kidney cancer. There is promising scientific research for immunotherapy treatment options for people with a tumor with sarcomatoid features.

This is a rare and highly aggressive cancer but is still considered a renal cortical tumor. It is more common in Black people and is highly associated with having sickle cell disease or sickle cell trait. Sickle cell trait means that a person has inherited the sickle cell gene from a parent.

Combinations of chemotherapy with blood vessel inhibitors are currently recommended treatment options based on some scientific data, and clinical trials are ongoing to better define treatment decisions.

Collecting duct carcinoma is more likely to occur in people between the ages of 20 and 30. It begins in the collecting ducts of the kidney.

Therefore, collecting duct carcinoma is closely related to transitional cell carcinoma. This is a difficult cancer to treat successfully long-term, even with combinations of systemic chemotherapy and surgery.

Chromophobe is another uncommon cancer that may form indolent tumors that are unlikely to spread but are aggressive if they do. Clinical trials are ongoing to find the best ways to treat this type of cancer.

This is a slow-growing type of renal cancer that rarely, if ever, spreads. The treatment of choice is surgery for large, bulky tumors.

Angiomyolipoma is a benign tumor that has a unique appearance on a CT scan and when viewed under a microscope. Usually, it is less likely to grow and spread. It is usually treated with surgery or, if it is small, with active surveillance.

Significant bleeding is a rare event but more likely in pregnant and premenopausal women. An aggressive form of angiomyolipoma, called epithelioid, can in rare instances invade the renal vein and inferior vena cava and spread to nearby lymph nodes or organs, such as the liver.