Skin cancer is one of the most common cancers in the world. Non-melanoma skin cancer refers to a group of cancers that slowly develop in the upper layers of the skin.

The term non-melanoma distinguishes these more common types of skin cancer from the less common skin cancer known as melanoma, which can be more serious.

The skin is the body’s largest organ. It protects the body against infection and injury and helps regulate body temperature. The skin also stores water and fat and produces vitamin D.

The skin is made up of 3 main layers:

The epidermis is the outer layer of the skin, defined as a stratified squamous epithelium, primarily comprising keratinocytes in progressive stages of differentiation. Keratinocytes produce the protein keratin and are the major building blocks (cells) of the epidermis.

As the epidermis is avascular (contains no blood vessels), it is entirely dependent on the underlying dermis for nutrient delivery and waste disposal through the basement membrane.

The prime function of the epidermis is to act as a physical and biological barrier to the external environment, preventing penetration by irritants and allergens. At the same time, it prevents the loss of water and maintains internal homeostasis.

The epidermis is composed of layers; most body parts have four layers, but those with the thickest skin have five. These 5  layers are: 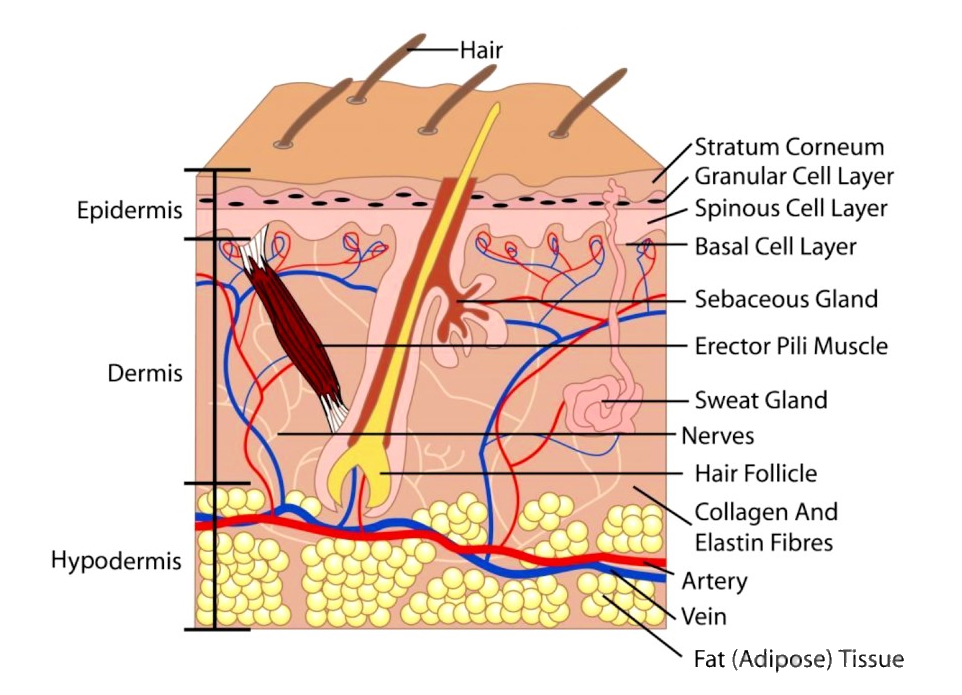 Stratum corneum: This is the topmost layer of the skin and is made up of keratin. This layer varies greatly in thickness in various regions of the body when compared to the other layers.

This layer plays the first line of defense against external agents.

Stratum lucidum: This thin clear layer is only present in the thicker skin (palms and soles).

Stratum granulosum: The chemicals (glycolipids) secreted in this layer keep the skin cells glued to each other.

Stratum basale (Stratum germinativum): This is the deepest layer of the epidermis. The cells found in this layer are constantly producing keratinocytes, which play an important role in the formation of Vitamin D with exposure to sunlight.

Keratinocytes also produce a protein, keratin, and lipids; these act as a protective barrier. This layer also contains melanocytes. Melanocytes produce melanin, which is a natural pigment responsible for the color of the skin.

The dermis forms the inner layer of the skin and is much thicker than the epidermis (1-5mm). Situated between the basement membrane zone and the subcutaneous layer, the primary role of the dermis is to sustain and support the epidermis.

The main functions of the dermis are:

The network of interlacing connective tissue, which is its major component, is made up of collagen, in the main, with some elastin. Scattered within the dermis are several specialised cells (mast cells and fibroblasts) and structures (blood vessels, lymphatics, sweat glands and nerves).

The epidermal appendages also lie within the dermis or subcutaneous layers, but connect with the surface of the skin.

The dermis is made up of two layers:

The hypodermis is the subcutaneous layer lying below the dermis; it consists largely of fat. It provides the main structural support for the skin, as well as insulating the body from cold and aiding shock absorption. It is interlaced with blood vessels and nerves.

Cancer begins when healthy cells change and grow out of control, forming a mass called a tumor. A tumor can be cancerous or benign. A cancerous tumor is malignant, meaning it can grow and spread to other parts of the body. A benign tumor means the tumor can grow but will not spread.

Doctors diagnose skin cancer in more than 3 million Americans each year, making it the most common type of cancer. If skin cancer is found early, it can usually be treated with topical medications, procedures done in the office by a dermatologist, or an outpatient surgery.

A dermatologist is a doctor who specializes in diseases and conditions of the skin. As a result, skin cancer is responsible for less than 1% of all cancer deaths.

In some cases, skin cancer may be more advanced and require management by a multidisciplinary team that often includes a dermatologist, surgical oncologist, radiation oncologist, and a medical oncologist.  These doctors will meet with a patient, and together they will recommend the best path forward to treat the cancer.

In some instances, the surgical oncologist will recommend a surgery to be performed in an operating room because the procedure to treat the cancer is too extensive for an office setting.

Other times, radiation therapy and/or treatments using medication given by mouth or by vein are recommended by the team either in place of or in combination with surgery.

Skin cancer is the most common type of cancer. Because non-melanoma skin cancer/keratinocyte carcinoma is so common and often curable, statistics are estimated. This is because individual cases are not usually reported to cancer registries.

The rate of deaths from these skin cancers have been declining in recent years. About 2,000 people die from basal cell and squamous cell skin cancer each year. Older adults and people with a suppressed immune system have a higher risk of dying from these types of skin cancer.

About 7,180 people die from melanoma each year. For other, less common types of skin cancer, about 4,630 people die every year.

Approximately 2,000 people in the United States are diagnosed with Merkel cell cancer each year. This number has been rising rapidly the last few decades.

Also, for some types of skin cancer, experts measure the survival statistics every 5 years. So the estimate may not show the results of better diagnosis or treatment available for less than 5 years.

There are 4 main types of skin cancer:

Basal cells are the round cells found in the lower epidermis. About 80% of skin cancers develop from this type of cell. These cancers are described as basal cell carcinomas. Basal cell carcinoma most often develops on the head and neck, although it can be found anywhere on the skin.

It is mainly caused by sun exposure or develops in people who received radiation therapy as children. This type of skin cancer usually grows slowly and rarely spreads to other parts of the body.

Squamous cell carcinoma is mainly caused by sun exposure, so it may be diagnosed on many regions of the skin. It can also develop on skin that has been burned, damaged by chemicals, or exposed to x-rays.

Merkel cell cancer is a highly aggressive, or fast-growing, rare cancer. It starts in hormone-producing cells just beneath the skin and in the hair follicles. It is usually found in the head and neck region. Merkel cell cancer may also be called neuroendocrine carcinoma of the skin.

Where the epidermis meets the dermis, there are scattered cells called melanocytes. These cells produce the pigment melanin, which gives skin its color. Melanoma starts in melanocytes, and it is the most serious type of skin cancer.

Basal cell carcinoma and squamous cell carcinoma are generally grouped together and called “keratinocyte carcinomas,” because they begin in a type of skin cell called a keratinocyte. They are also called “non-melanoma skin cancer” to distinguish them from melanoma.

Melanoma is treated differently because it is more likely to spread than other skin cancers. Merkel cell cancer frequently is grouped separately from basal cell carcinoma, squamous cell carcinoma, and melanoma, although technically it is considered a non-melanoma skin cancer.

There are a few other, rare types of skin cancer, including cutaneous (skin) lymphomas, Kaposi sarcoma, skin adnexal tumors, and sarcomas, all of which are classified as non-melanoma skin cancers.

Talk with your doctor if you have any questions about this information.