A 57-year-old man with life-threatening heart disease has become the first person in the world to get a heart transplant from a genetically-modified pig. This new and groundbreaking procedure offers hope to hundreds of thousands of patients with failing organs.

The patient, David Bennett, a Maryland resident who had been hospitalized and bedridden for the past few months, is doing well three days after the experimental eight-hour operation, said doctors at the University of Maryland Medicine (UMMC) in a statement.

The transplant was considered the last hope of saving Mr. Bennett’s life, though it is not yet clear what his long-term chances of survival are.

“It was either die or do this transplant,” Mr. Bennett explained a day before the surgery. “I know it’s a shot in the dark, but it’s my last choice,” he said.

Bennett was deemed unfit for a conventional heart transplant or an artificial heart pump due to a life-threatening arrhythmia which is an irregular heartbeat condition that can lead to cardiac arrest or stroke. He was also connected to a heart-lung bypass machine, called Extracorporeal Membrane Oxygenation (ECMO), to remain alive.

“It creates the pulse, it creates the pressure, it is his heart,” said Dr. Bartley Griffith, the director of the cardiac transplant program at the medical center, who performed the operation.

“It’s working and it looks normal. We are thrilled, but we don’t know what tomorrow will bring us. This has never been done before.”

Doctors at the University of Maryland Medical Center were granted a special dispensation by the US medical regulator to carry out the procedure, on the basis that Mr. Bennett – who has terminal heart disease – would otherwise have died.

Last year, some 41,354 Americans received a transplanted organ, more than half of them receiving kidneys, according to the United Network for Organ Sharing, a nonprofit that coordinates the nation’s organ procurement efforts.

But there is an acute shortage of organs, and about a dozen people on the lists die each day. Some 3,817 Americans received human donor hearts last year as replacements, more than ever before, but the potential demand is still higher.

Scientists have worked feverishly to develop pigs whose organs would not be rejected by the human body, research accelerated in the past decade by new gene editing and cloning technologies. The heart transplant comes just months after surgeons in New York successfully attached the kidney of a genetically engineered pig to a brain-dead person.

Researchers hope procedures like this will usher in a new era in medicine in the future when replacement organs are no longer in short supply for the more than half a million Americans who are waiting for kidneys and other organs.

He had been deemed ineligible for a human transplant, a decision that is often taken by doctors when the patient is in very poor health.

One additional gene in the pig was also knocked out to prevent excessive growth of the pig heart tissue, which totaled 10 unique gene edits made in the donor pig. For the medical team who carried out the transplant, it marks the culmination of years of research and could change lives around the world. 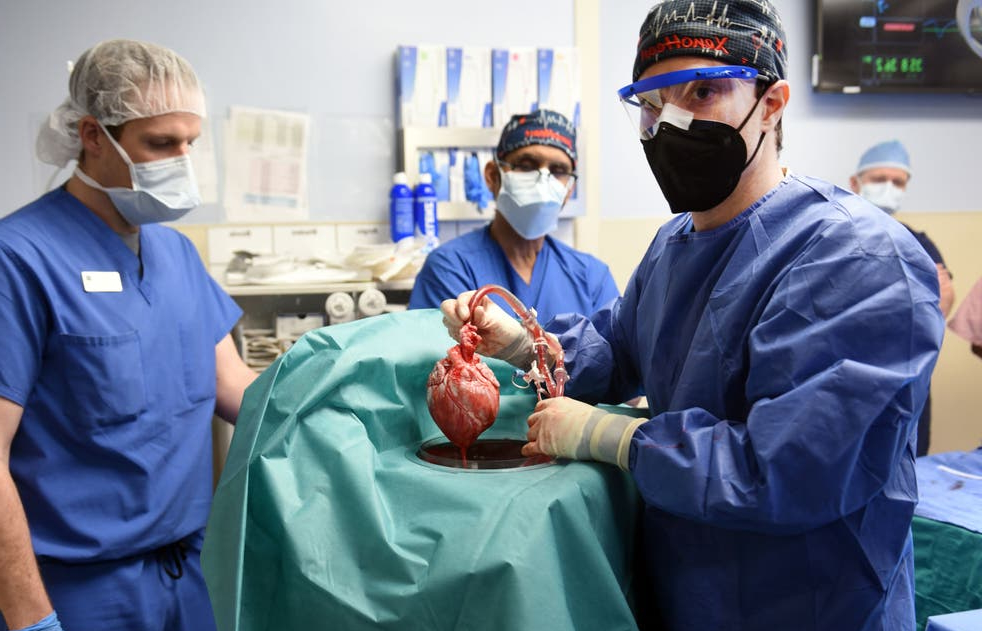 Dr. Christine Lau, chair of the Department of Surgery at the University of Maryland School of Medicine, was in the operating theatre during the surgery.

“He’s at more of a risk because we require more immunosuppression, slightly different than we would normally do in a human-to-human transplant. How well the patient does from now is, you know, it’s never been done before so we really don’t know,” she told.

“People die all the time on the waiting list, waiting for organs. If we could use genetically engineered pig organs they’d never have to wait, they could basically get an organ as they needed it.

“Plus, we wouldn’t have to fly all over the country at night-time to recover organs to put them into recipients,” she added.

The possibility of using animal organs for so-called xenotransplantation to meet the demand has long been considered, and using pig heart valves is already common.

In October 2021, surgeons in New York announced that they had successfully transplanted a pig’s kidney into a person. At the time, the operation was the most advanced experiment in the field so far.

However, the recipient on that occasion was brain dead with no hope of recovery.

Mr. Bennett, however, is hoping his transplant will allow him to continue with his life. He was bedridden for six weeks leading up to the surgery and attached to a machine that kept him alive after he was diagnosed with terminal heart disease.

But exactly what will happen next is unclear. Bennett is being carefully monitored over the next days and weeks to determine whether the transplant provides lifesaving benefits, the doctors said.

“I look forward to getting out of bed after I recover,” he said.

Organs from genetically modified pigs have been the focus of much of the research in xenotransplantation, in part because of physiologic similarities between pigs, humans, and nonhuman primates.

The pig heart was provided by Revivicor – a regenerative medicine company based in Blacksburg, Virginia.